Bob’s your uncle and Charley is your aunt! 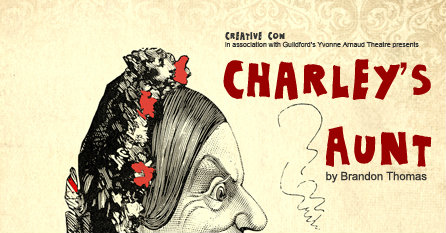 Bob’s your uncle and Charley is your aunt!

We went to see a production of Charley’s Aunt last week at the Regal Theatre in Minehead by a company we had never heard of called Creative Cow.It was only on for one evening, being part of a nationwide tour.

Creative Cow was established six years ago and pride themselves on “touring in the good old-fashioned sense”, travelling light (only one van for actors, costumes, set and equipment), playing for one night, then moving off again. This means they have to be supremely flexible: the set has to be suitable for any space, small or large, so must the lighting and sound, so also the actors who must be prepared for different acoustics and the proximity or otherwise of the audience.

They are a young group in every sense of the word. Set up, as I said, just  six years ago, their first rehearsals took place “in a cowshed with a herd of bemused White Park cattle looking on”, hence the name Creative Cow. Their youth and vigour certainly breathed new life into a play we had not seen for years. It is a long play by today’s standards. Many scenes could be halved to good effect. The second act in particular seemed to drag, but this is a fault of the play, not the actors, who managed to keep it bubbling along with their energy and enthusiasm. They were not afraid of injecting a couple of modern touches, such as looking and speaking to the audience and changing the meaning of some of the dialogue, whilst remaining true to the play.

In the true tradition of a touring theatre company some actors played more than one role, something I’m not keen on myself, though I realise it makes good economic sense. This was done to good effect in the case of the actor who played Spettigue, Brassett and Sir Francis Chesney, but I confess to being a bit confused when the two actresses came on, dressed so similarly to their previous roles that I didn’t realise at first they were playing different people.

The costumes overall though were imaginative: the men’s very traditional, except for the yellow socks, the ladies’ a modern take on late nineteenth century fashion (we loved the hair bows and the parasols!).

It’s always a shame a touring company is limited to a simple, easy assembled set, but we admired the effect achieved by Creative Cow. Clever use of props and lighting took us from inside an undergraduate’s rooms at Oxford, outside to the garden, and back inside again to a fashionable drawing room. We particularly enjoyed the changes of scene in front of our very eyes, including when the actors leapt over a carpet being rolled up under their feet!

It would be impossible to single out the best performer. Harvey Robinson (Charley’s fictitious aunt) clearly had the plum role and was a joy to watch, but they were all excellent, even the cameo parts, wonderfully executed, beautifully choreographed, excellent comic timing and word perfect.

There’s still time to catch a performance of “Charley’s Aunt”. Creative Cow tours until the end of June. Take a look at their website for details. www.creativecow.co.uk