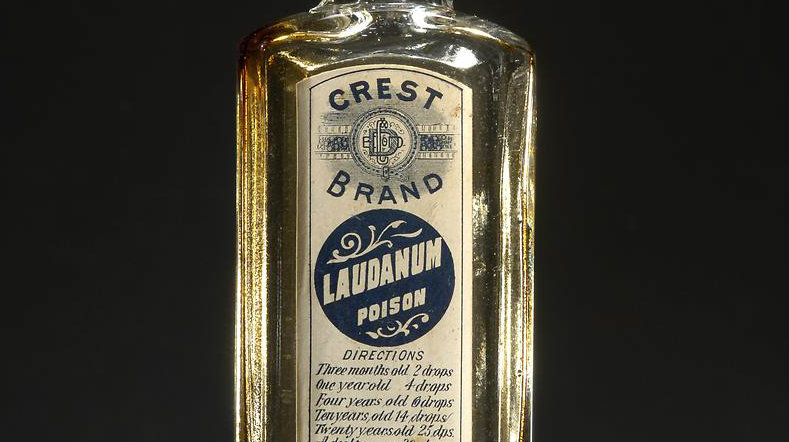 I sit on a high shelf above the mantelpiece in Coleridge Cottage, far from the reach of small children. Yet I have been given to them when they suffer from colic. I’m the panacea of all ills, the great analgesic of my days, used to treat anything from female menstrual cramps to diarrhoea and toothache.

I am laudanum, an innocuous-looking  pale yellow liquid in a small glass bottle. Bitter to the taste, I’m 10% opium diluted with 90% alcohol and I don’t even need to be prescribed by a doctor. You can buy me in any pharmacy.

Coleridge began taking me for joint pains. When he was very young he ran away from home after an argument with his older brother and spent the night in a damp cave by the river in Ottery St Mary. Ever  since then he suffered from joint pains and may possibly have had rheumatic fever. Whatever the cause he used me on and off from this time.

My recreational effects were known, but few people became serious addicts. De Quincy, famously, was another “Opium Eater”. The majority of people, it seems, were able to stop taking me when necessary.

Coleridge knew full well the effect I had on him. He had experimented with recreational drugs at university, smoking hash and inhaling laughing gas with Humphrey Davy to  experience the effects. He knew that in addition to relieving his pain I “took the edge” off things. The strains of his marriage, Sarah’s quick temper,  his financial difficulties, all became easier after a dose from my little bottle. His was an addictive personality. If it hadn’t been Laudanum it would probably have been alcohol. His son Hartley became a hopeless alcoholic, disappearing on drinking binges for weeks on end, sleeping in ditches or at the houses of sympathetic friends. Coleridge’s daughter Sara too became addicted to opium. Without it she couldn’t sleep.

The irony is, of course, that in the longterm  I caused more symptoms than the original complaint I was taken to relieve.

Coleridge suffered from dreadful constipation, he couldn’t sleep at night without me but then woke with nightmares and dreaded going back to sleep again. He had violent mood swings and bouts of deep depression.

It’s widely thought that Coleridge wrote all his poetry under my influence but I can only take credit for Kubla Khan and only then because Coleridge himself gives me credit. Anyone who has ever written poetry will tell you that they may get the inspiration from a dream but the hard work comes afterwards: the writing, editing, re-editing, searching for just the right word or rhyme.  So whilst it is true the very meter of the poem is redolent of a hypnotic drug-induced state, it is unfair to Coleridge to say he used me to help him write.

Any addiction is had to live with. Coleridge’s wife, his family and friends, all suffered from Coleridge’s opium habit.

Coleridge’s best poetry, the poetry he is remembered for today, was written in a humble cottage in Nether Stowey in Somerset before the opium habit became an addiction. What would have happened if Coleridge had never reached for my little glass bottle when he was suffering from a “slight dysentry”? We may not have had Kubla Khan. Or  maybe one night he would still have dreamed the same dream, written the same hypnotic poem when he woke up. But without my little bottle he might have gone on to write even greater poetry, he might not have separated from his wife, become estranged from his family. argued with Wordsworth and may of his closest friends. A whole parallel life for Coleridge, all resting on my one small bottle of yellow liquid