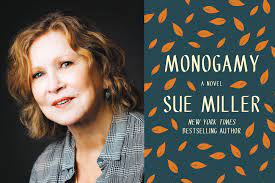 It is rare for me to give up on a book but with this one I came to the stage where I picked it up with a sense of dread so about three quartets of the way through I finally gave up.

The reviews I have read seem polarised: some people raving about the beautiful writing, others, like me, finding it repetitive and tedious.

I was drawn to this book by the blurb: “Annie has long known that no marriage is what it seems to those on the outside, a fact that is a source of comfort when her husband die. That is, until she discovers truths about Graham she’d never considered, revealing that it can be just as much a mystery to those on the outside.”

Initially I enjoyed the style of writing. I have never read any other books by Sue Miller and I found it refreshing. But after a while I found the concentration on the minutiae, the detailed descriptions of the route Annie or Graham take to work for example, and the sheer repetition of words, most annoying.

I also found the characters less than real: Graham with his endless bonhomie , so popular with everyone, always doing the right thing, Annie with her close relationship to his ex-wife and her beauty, their daughter Sarah, plain and dumpy, living in their shadow.

Then there is Annie’s reaction to her husband’s death. Yes, she is in shock but it seems unbelievable that she wouldn’t listen to her answer phone messages or open her post and then disappear to her country retreat without telling anyone.

But overall, really, I just found the book boring: nothing happened, the flashbacks to previous times were confusing and everyone’s reactions to the situations seemed unreal.

My other criticism is the sex. I’m no puritan and I have included sex scenes in my book where I feel they are necessary for the story or to explain how and why a character behaves the way that do, but the graphic sex scenes in this story seem unnecessary and feel a though they have been shoe-horned into the story for effect. It doesn’t add to our knowledge of her character at all to know that Annie has a high sex drive and has been promiscuous in the past.

All in all a book I could not recommend to anyone.