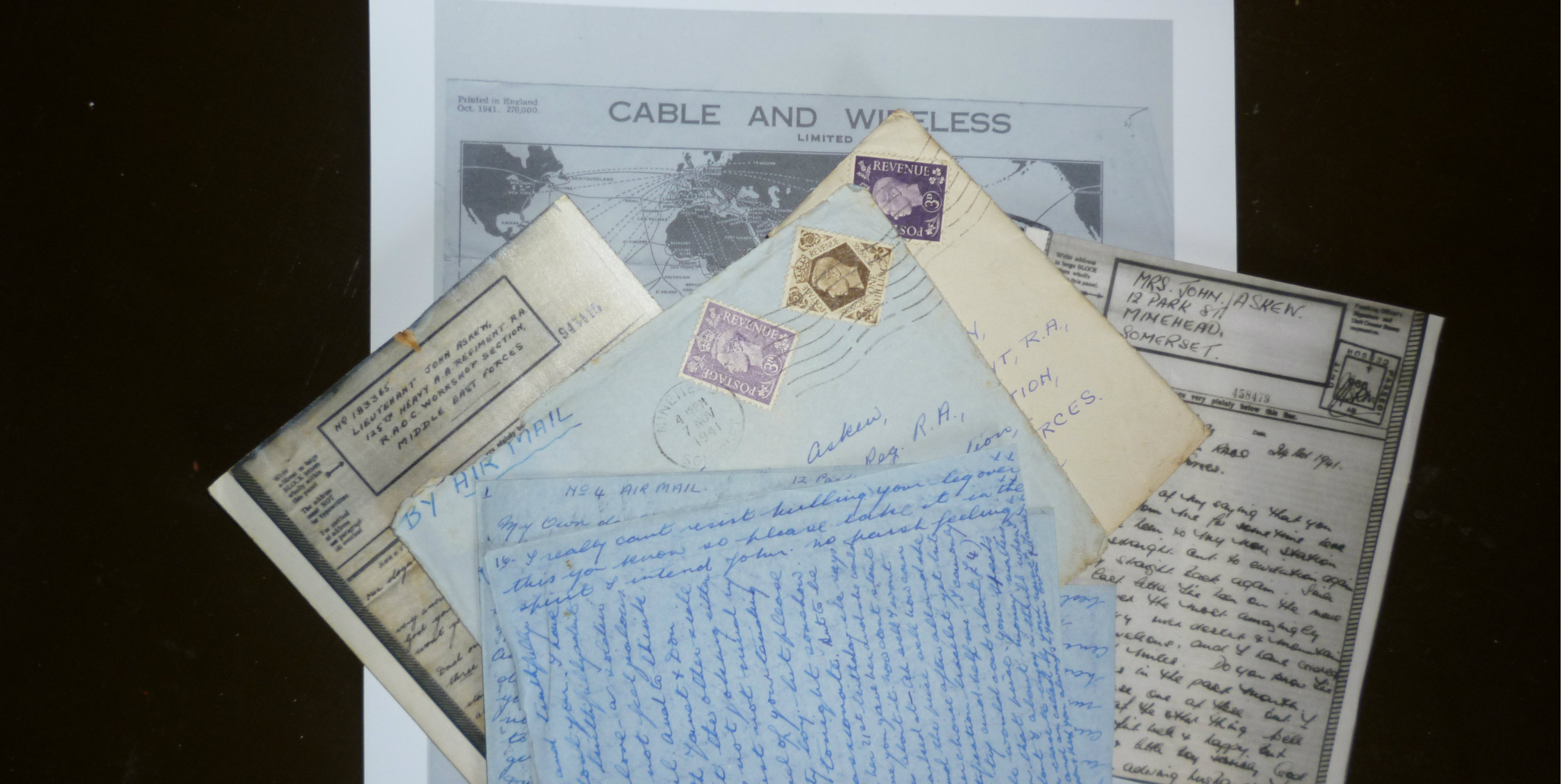 My parents-in-law kept every letter they ever wrote to each other. The first in 1932, the innocent flirtatious letter from an eighteen year old girl to a seventeen year old boy, the last in 1946 from an army officer to the wife he had been separated from for five years. Importantly for us, left with these letters, is the period of time they cover, a time of change and upheaval not only in their lives but in the world at large. These letters give us a unique insight into life in England before and during the Second World War and on Active Service overseas

The letters were in several shoe boxes, in absolutely no order, birthday cards, telegrams, wedding invitations, even shopping lists, all jumbled up amongst them. It took me weeks to sort them out, my task made worse by the constant temptation to stop and read the more interesting ones as I went along.

Forcing myself to keep to the job in hand I sorted them into date order. This in itself wasn’t easy because some of the post marks were illegible and I had to open the letters to check the date inside. Once I had done this I sat down and read each one. Having decided by then that simple re-production of the letters would be tedious for the reader, I decided instead to write a novel based on the letters,  “Counting the Days”.

As I wrote this something interesting happened. I stopped thinking of the people who wrote these letters as “Mum” and “Dad”, two people I had only ever known in their later life, and began instead to see them as John and Janie, a vital young couple, meeting in their teens, gradually falling in love in the innocent way people did in the early 1930’s, getting married, having a baby, then going through the hardships of war

John and Janie met at their local church. John was training to be an optician, Janie was a secretary. In 1938 they married and moved to Minehead, where John had joined a firm of opticians, and their son Anthony was born in October 1939, just after war with Germany was declared.

In May 1940 John enlisted in the Royal Ordnance Armament Corps. For a year he saw little of his family as he shuttled around from Woolwich to Bury to Leicester and finally to Portsmouth, rising through the ranks to 2nd Lieutenant.

In June 1941 he learnt he was being sent overseas. He was gone for four years. There were no phone calls, no emails, no Skype or Facebook. His son was a toddler, eighteen months old when he left, a schoolboy of five when he returned. It is a testament of their love that their marriage survived.

This is the story of an ordinary couple living through extraordinary times, a story shared by many others, told in their actual words.


2 Comments for The Fonder Heart

A really gripping piece and so very interesting. It must have been such a privilege for you to have found this material, to actually to able to read personal letters. Very touching and so true a comment as you put it “It is a testament of their love that their marriage survived”. We all go through difficult times but I have to say those times were truly hard times – amazing how they survived those situations, but then I suppose people did then as they didn’t have much choice. Thanks for sharing this story – I found it very interesting indeed. 🙂

I’m glad you enjoyed it. I have been amazed by how many people of all age groups have been interested in the letters. How lucky we are that my parents-in-law were sentimental enough to want to keep them. I will let you know when I have found a publisher for “Counting the Days”.