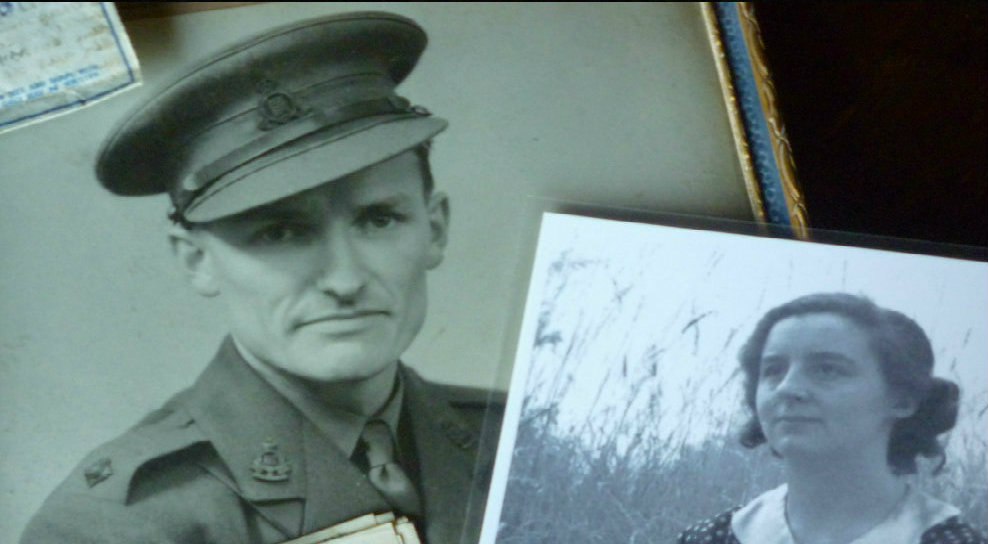 “I couldn’t bring myself to throw them away.” My brother-in-law said. “I’m sure there’s a story here somewhere.”

The letters were in several shoe boxes, totally out of order, birthday cards, telegrams, wedding invitations, even shopping lists, all jumbled up amongst them. My parents-in-law were sentimental. They hated the idea of throwing anything away, particularly the words they wrote to each other. How lucky for us that they did. For the majority of this correspondence covers the time my father-in-law was away “on active service”, for a year in the UK, then four years overseas, and a further year back in England waiting for de-mob. Like many servicemen he also kept a diary. These too we still have: five slim diaries covering the period May 1940 when he enlisted to July 1945 when he returned to civilian life.

It is a story known to many. Not unique, but fascinating nonetheless, for each telling of it is personal. These letters cover a period of time of tremendous change and upheaval not only in their lives but in the world at large. Here we have a unique insight into life in England before and during the Second World War and on Active Service overseas.

It took me weeks to sort them out, my task made worse by the constant temptation to stop and read the more interesting ones as I went along.

Forcing myself to keep to the job in hand I sorted them into date order. This in itself wasn’t easy because some of the post marks were illegible and I had to open the letters to check the date inside. Once I had done this I sat down and read each one. Having decided by then that simple re-production of the letters would be tedious for the reader, I decided instead to write a novel based on the letters. My novel, “Counting the Days” embraces the full correspondence, starting in 1932 with the innocent flirtations of an eighteen year old girl to a seventeen year old boy, and ending in 1946 with the letter from an army officer to the wife he had been separated from for five years.

In the days before email and text letters were the only way to express private and intimate thoughts to one’s loved ones. Telephones were expensive and used for important messages rather than for idle chit-chat like they are nowadays. Even when John and Janie were living near each other in London and seeing each other regularly they still sent hand-written notes to each other.

As I wrote the book something interesting happened. I stopped thinking of the people who wrote these letters as “Mum” and “Dad”, two people I had only ever known in their later life and began instead to see them as John and Janie, a vital young couple, meeting in their teens, gradually falling in love in the innocent way people did in the early 1930’s, getting married, having a baby, then going through the hardships of war.

Whilst still looking for a publisher for “Counting the Days” I was struck with a brilliant idea: blog the letters on the day they were written 73 years ago. . For this I decided to concentrate on the War Years, and I’ve called the website “On Active Service”, which is what they used to write on the envelopes of the letters. 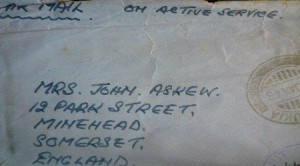 The website wouldn’t have been possible without the kind permission of my husband Anthony and his brother Paul to reproduce the letters and diaries and my brother Robin Wilson’s I.T. skills in setting up the site.

So take a look at the site which goes live today, Sunday 17th November.


3 Comments for On Active Service

Thanks for sharing it.

This is real Family History, using the letters written by a young couple separated by the war. It is a sample of what was happening everywhere. You realise how important letters were, in keeping these relationships going. The Time – Line was also helpful in providing the context. A gem!