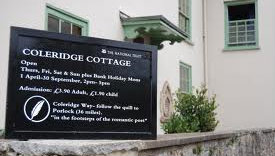 Last week we did our first stint as National Trust Volunteer Room Guides in Coleridge Cottage in Nether Stowey.

The idea of being Room Guides evolved gradually. We visited Chartwell House, Churchill’s home, when we were staying with my brother in Sussex and the Room Guides were so helpful and knowledgeable and my brother said “This is something you could both do now you’re not working.” Then someone in my Pilates class mentioned she was a volunteer at Coleridge Cottage. So we put ourselves forward and were accepted!

We have always been fascinated by Coleridge and Wordsworth. They are so closely linked with the Lake District that many people are unaware of their link to Somerset.

Coleridge, of course, was a West Country man, born in Ottery St Mary in Devon, and his wife Sarah was from Bristol. It’s Wordsworth who was the Northener and his friendship with Coleridge that drew him to Nether Stowey.

What would we make of Coleridge and Wordsworth if we met them today? It’s easy to forget they were only in their twenties when they lived here. Even at the time they were seen as spongers, without any profession or means of earning a living, relying on wealthier friends and patrons to support them. The locals were wary of them, these fanciful people who kept strange hours, wandering on the Quantock hills in the moonlight and writing “verse”.

Coleridge, in fact, never thought of himself as a poet. Full of many schemes, he was a journalist, a writer, a philosopher, a visionary, a great speaker. Had it not been for the patronage of Josiah Wedgewood, he would have been a Preacher. He had already accepted a position when Wedgewood stepped in with a better offer, one which made him financially secure, and meant he could dedicate his life to writing.

This was in the future though. When Coleridge first moved to the cottage known as “Gilbards” in Lime Street, Nether Stowey, money was tight and he was reliant on the charity of friends Tom Poole, a well-off local tanner, and Joseh Cottle, his publisher. These two men saw in Coleridge what Josiah Wedgewood saw later on and were willing to subsidise him financially.

The cottage we now know as “Coleridge Cottage” was a two-up, two down building with an outhouse tacked on for the backward young girl, the only servant they could afford. In this tiny dwelling Coleridge expected his wife Sarah to welcome and feed a constant stream of visitors, people we now recognise as giants of their time: Charles Lamb, William Hazlitt, and most importantly William Wordsworth and his sister Dorothy. Since Sarah had a young baby and was soon pregnant with another, it is hard to know how she coped with only the young maidservant to help her.

It’s easy to overlook the importance of this tiny cottage in Lime Street, yet here, under the spell of the Wordsworths and the influence of the Quantock hills and Somerset coastline, Coleridge wrote the poetry he is most famous for: The Rime of the ancient Mariner, Kubla Khan, Frost at Midnight and This Lime Tree Bower My Prison.

Hi Bethany,
I enjoyed reading your blog about Coleridge. I agree about the general perception of them as linked to the Lake District and have said to visitors on occasion that they should be known as the ‘Quantock Poets’ rather than ‘Lake Poets’.
You should use your blog as a basis for a 10 minute intro talk that Caroline has been asking us to do (Forgive me if you have already done so). I’ve done ‘What made STC come to Nether Stowey?’, which sort of leads on to your theme.
Will doubtless bump into you at the cottage in due course.
Trevor