….in a shower of rain 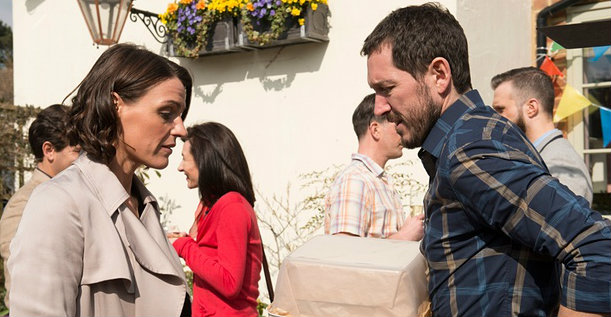 In a shower of rain

Did you watch the TV series “Doctor Foster”? The majority of the reviews I’ve seen have rated it highly and I understand there may even be a sequel.

True, the acting was excellent, particularly Suranne Jones as the main protagonist and after the first episode I was hooked and had to watch the entire series. As a real-life story, however, I thought it was totally unbelievable.

For the benefit of this who didn’t watch it I’ll give you a brief run-down: hard-working successful General Practitioner Gemma Foster finds out her equally hard-working but unsuccessful businessman husband has been having an affair with a much younger much prettier girl.

So far, so credible. However, in my (albeit limited) experience, the main reason people have affairs is because they are unhappy in their present relationship. Yet in the very first scene we are shown Simon returning from a “business trip” desperate to have very intimate, very loving sex with Gemma. You have to admire his energy.

This scene is followed by a family breakfast: husband and wife bantering easily while twelve-year-old son gets ready for school. Here we see a happy loving family, no apparent reason for the husband to stray.

Of all the many ways a wife begins to suspect her husband of having an affair the one used in this series has to be the flimsiest: she finds a long blonde hair on his scarf. Most wives would assume he must have brushed against someone in a corridor, or hugged a female friend or work colleague, maybe even lent his secretary his scarf at lunchtime. Gemma, however, decides he must be having an affair. She follows him, checks his phone, confront him even, but he denies it. When she finally finds the proof she is looking for she discovers many of her intimate friends and even Simon’s mother have known about his infidelity for two years. Their neighbours and his secretary even went on holiday with him and his young lover and they all cover up for him.

What happens next is truly incredible. She breaks all her ethical codes as a doctor to recruit a patient to spy on Simon, offering her sleeping pills and money as a reward. I can suspend my disbelief so far, but not this far. I cannot believe any General Practitioner, however distraught, unhinged even, would behave like this.

The situation worsens when Simon’s lover Kate consults her as a GP and Gemma realises Kate is pregnant. She also finds out that Simon is in financial difficulties. Having initially decided her marriage was worth saving Gemma now consults a solicitor.

Revenge, however, is upmost in her mind and in another breaking of her Hippocratic oath she tells Kate’s parents about her pregnancy, then goes on to scupper Simon’s business plans, and kidnaps her own son to goad Simon into assaulting her. Okay, so I understand this is all to her own end: so she can gain custody of her son, keep the house and her own good name, whilst taking everything from her husband, but quite apart from the moral and ethical code breaking, no mother would frighten their own child like that and it’s not fair to deprive a child of a parent, no matter what has happened between the adults.

A gripping series, yes, brilliant acting and direction, but not one I would watch again and if there is a sequel I wouldn’t bother with it.