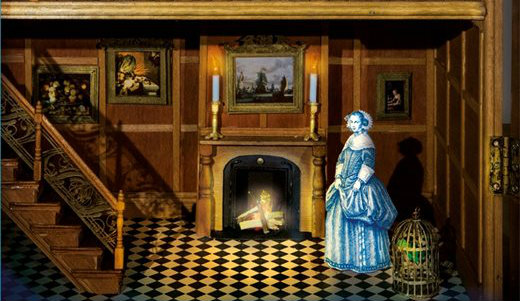 I picked this book up several times in various bookshops before I finally decided to buy it, manly because my niece said she was in the middle of reading it and said she “couldn’t put it down.

Like her, I was, to begin with, similarly beguiled, immediately drawn by the setting, the attention to detail, the evocation of the atmosphere of seventeenth century Amsterdam. The descriptions were so accurate it was like stepping into one of those paintings of the interiors of Dutch houses and then out into the streets and the city beyond. Peppered with period detail and dutch words for authenticity I felt just as though I was living there myself. For the first few chapters I too couldn’t put it down and when I wasn’t reading it I was thinking about it, imagining myself in that world of Delft and water with that air of mystery, of something about to happen.Unfortunately, like many stories, that initial excitement is impossible to maintain.

Inspired by a visit from the author to the Rijksmuseum in Amsterdam, the story evolves from the gift of a Dutch cabinet house (a doll’s house), from an Amsterdam merchant , Johnannes Brandt to his new young bride, Petronella. Newly arrived in Amsterdam, Petronella has much to learn, not just bit married life in the house still inhabited by her sister-in-law but about city life and trading in the important port of Amsterdam.

The real Petronella Oortman would have been disappointed I feel with the story Jessie Burton spun for her. The main protagonists , like their counterpart dolls in the dolls’ house never step outside their stiff exteriors. I never felt I really knew them and they frequently act out of character. Petronella herself is difficult to know. We get very little “back story” about her but it’s the little things that are missing. For example, although the story only spend sour months, I find it hard to believe with all the difficulties she is going through, she never writes to her mother or tries to visit her. Her husband Johannes Brandt is equally unfathomable and one of the main tenets of the story, why he doesn’t sell his friend’s sugar, is never explained. As for his sister Marin, I don’t want to divulge the plot too much for those who haven’t read it, but there were just too many inconsistencies in her character that left me thinking ‘this simply wouldn’t happen”.

The biggest disappointment, however, is that the reader is cheated out of any sort of explanation of the main mystery of the story.

The feeling I had is that the author is able to set her scene beautifully but doesn’t know how to tell a story.

So despite the many good reviews it has received, the way it took me to an Amsterdam I could only dream of and its beautifully presented blue-edged pages, I would not recommend it and have passed it on to a charity shop.