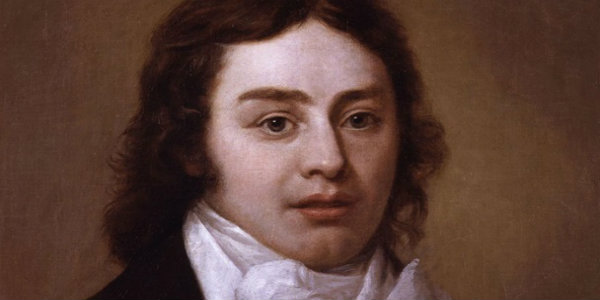 He was a man of huge intellect and many talents. With his energetic enthusiasm, magnetic personality and copious charm, he was attractive to men and women alike.  His was a complex character, given to marvellous sweeping ideas, flights of fancy and projects he started and often failed to finish. Nowadays we might  consider him to be bi-polar. He was unreliable, unable to keep to deadlines and always ready with an excuse. It is well-known he was also an addictive personalty: if it hadn’t been opium, it would probably have been alcohol. His son Hartley became an alcoholic.

Despite these many failings Coleridge made friends readily and was attracted to more solid reliable characters than himself. people he could consider his “rock.” After an initial “honeymoon” period, however, these relationships often faltered, notably so with the Wordsworths, Robert Southey and William Hazlitt.

Thus it was with his love life.

When he was sixteen Coleridge met Mary Evans, the sister of a schoolfriend. She was his first love, “whom for five years I loved-almost to madness”.

Coleridge never told her how he felt about her and in October 1795, she married someone else.

When Coleridge made plans to emigrate, Mary Evans wrote Coleridge imploring him not to go. The letter reopened old feelings for Coleridge, inspiring the poem “Sonnet: To my Own Heart.”

This sort of distant love, an adoring infatuation, seems to have been typical of Coleridge. It’s as though he built up a picture of someone and worshipped that idea. It must have been difficult in those days to get to know someone of the opposite sex.  If a couple spent too much time together it was assumed they would get married.

Enter Coleridge’s next love, Sarah Fricker. The Fricker sisters had been brought up with the Mary Wollstonecraft values of feminism. They spoke their minds, cared little for convention and believed women were equal to men in marriage, not subservient to them. Instantly attracted to each other, Coleridge and Sarah seemed destined to be together. Sarah’s sister Edith was engaged to Coleridge’s friend Robert Southey. He and Coleridge had devised a scheme called Pantisocracy, a sort of latter-day hippy commune where men and women were equal, and were considering emigrating to America. Since the scheme depended on twelve like-minded men and women and since the Fricker sisters were free-thinking young ladies, it became natural for Coleridge and Sarah to make up a foursome with Southey and Edith. By the time the scheme failed due to lack of funds and insufficient numbers, Sarah had been seen so often in Coleridge’s company that he was obliged to propose to her. He suffered terrible doubts: he couldn’t deny the physical attraction, but was uncertain whether he was actually in love. Ultimately, however, he convinced himself that he was,  and they married. Initially the marriage seemed a success. Coleridge wrote to his friends ecstatically about “his Sarah” and when their son Hartley was born his happiness seemed complete. One of the things he had loved about Sarah was her independence, her ability to speak her mind, not to be cowed. This, however, was going to be one of the things he learned to hate. Sarah was bright, intelligent, well-educated. She was cheerful and optimistic. She also had a quick temper and faced with Coleridge’s indolence, his inattention to her, his inability to support her financially, her patience wore thin. What woman cannot sympathize with her when she railed against him for leaving her looking after the children while he traipsed around with his friends, particularly the Wordsworths.

Like all men and women who feel their partner “doesn’t understand them” Coleridge looked elsewhere. This time it was another Sarah who drew his attention. Young and pretty, vivacious and clever, Sarah Hutchinson also had the good fortune to be the sister of Wordsworth’s wife, thereby bringing Coleridge ever closer to his idol. As time went by and Coleridge, increasingly addicted to opium and estranged from his wife, pursued this forbidden love, it was one of the things that came between him and the Wordsworths. This other Sarah resembled his wife in many ways: she had the same small plump figure with ample breasts that Coleridge found appealing, and the same beautiful auburn hair. By all accounts she had the same strong temperament, and it is interesting to speculate, had she actually become Coleridge’s mistress, whether he would have found her outspokenness just as irksome as he found his wife’s. As it was, however flattered she might have been by his initial attentions, Sarah Hutchinson grew tired of his constant protestations of love. So she, like Mary Evans, became another woman he worshipped from afar, mysterious, unattainable, someone he thought he knew, but never really did.

Jealous of William Wordsworth’s supportive coterie of wife, sister,  and wife’s sisters, Coleridge was searching for the same. Once Sarah Hutchinson had disappeared from his life he was never romantically linked to anyone else. Neither was his wife, and in later life she occasionally visited him at his house in Highgate.

Maybe he had found what he was looking for years ago, but in his search for the unattainable, he had thrown it away.