We usually take a late summer break in September but we left it too late to book it thus year and found there were no flights available.

For many years we have been going to Majorca at this time of the year but this year we thought we would try somewhere different.

We last went to Tuscany in 1993 when the children were teenagers. We took the ferry to Calais and drove down, taking three overnight stops, which seems amazingly intrepid to us nowadays, but at the time seemed quite normal. We had driven down to the Dordogne several times and this wasn’t much further. We planned our route, found hotels without booking ahead and navigated our way to the farmhouse villa near Florence without the aid of sat nav.

Twenty three years later and without children in tow, we flew to Pisa, collected a hire car from the airport and drover to a hotel near San Gimignano, about an hour and a half’s drive from the airport.

We had forgotten how beautiful Tuscany is: the gentle rolling hills, the pale green groves of olive trees, rows of vineyards marching in organised lines across the landscape and the tall slim cypress trees clustering around the terracotta roofed houses.

Tuscany in October is quite different from the Tuscany we remembered in late august  in the middle of the school holidays. The squares we remembered bustling with people, the pavements crowded with umbrella-ed cafes, were now empty, just a few other holidaymakers wandering around the echoing streets. The cities, of course, were still busy, tourists flocking to Florence and Siena, where you now have to pay to go into the cathedrals. It was free when we went with the children and far less crowded than nowadays.

The roads too, were busier, and there were long queues for the  car parks in San Gimignano where we remember parking easily before. It was even free to park in the evenings, whereas now there is a charge of five euros from 8pm to 8 am.

The famous towers of San Gimignano 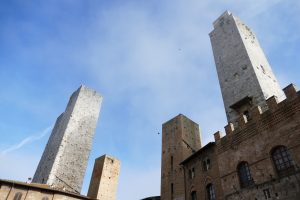 We wouldn’t normally holiday so late and expected it to be cooler of course but we had a huge thunderstorm and heavy rain the day we arrived. The next day it rained on and off but the rest of the holiday was mostly blue skies and Tuscany looked beautiful with the changing autumn colours.

However, if we go again we would choose late spring or September when the weather’s warmer. As for the big cities like Florence and Siena where we parked without problem all those years ago, these are best left nowadays for city breaks where you stay in a central hotel and walk to the sights.